Biography. How the Story Goes

Myron Lee was the first rock and roll talent to catch the public’s ear and the people’s notice in South Dakota in the late 1950’s.  He is considered to the be the “founding father” of rock and roll in his native state.  While still in high school in his hometown of Sioux Falls, the natural musician and born showman organized a band made up of his Washington High School classmates Jerry Haacke and Barry Andrews, along with Dick Robinson, who was a student at Augustana College in Sioux Falls, and Curtis Powell of Garretson.  They called themselves “The Caddies” and began to perform locally, attracting full houses and happy Sioux Falls crowds at the Stardust Club and later at The Cabana. 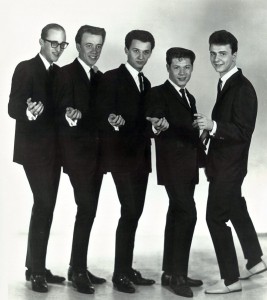 An early promo shot of the group.

The Caddies had their first out-of-town date in 1958 at the Tyndall Groveland Park Ballroom, playing during breaks taken by the featured group known as Moller’s Accordian Band. Over the next thirty-four years, Myron recorded thirteen single records and three albums. Many of those first recordings were written by Myron, including “Baby Sittin” which was also recorded by an English group known as Bobby Angelo and the Tuxedos. It became a big hit in Europe in 1961, and royalties for the song are being sent to Myron. Many of his records are now much sought after collector items.

The professionalism and style of the group of young high school students that played in Tyndall in 1958 appealed to all ages. Before that historic night at the Groveland Park Ballroom was over, the dancehall manager, George Beringer, having observed the excitement and audience appeal that Myron Lee and the Caddies created during their brief intermission performances, hired them to come back the next Saturday. The word was out and the group was soon in great demand throughout the upper Midwest. 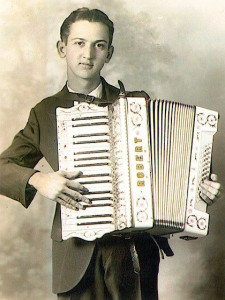 Since he can remember, music has been a part of Myron Robert Wachendorf’s life. Before moving from Parker, SD, to Sioux Falls, Myron’s father, Bob Wachendorf, had a popular Parker-area band. They played all the small towns in the area. A small notebook Myron still has, lists the dates, places and payment Bob received, such as “Feb. 1, 1938, Hurley, $2,” or “Jan. 30, 1940, Sioux Falls IOOF, $3.00.” After getting a job at Weatherwax Men’s Store in Sioux Falls, Bob quit the Swingsters and became a pick-up musician for area dance bands in the late 1940’s. Often, he took young Myron along for the local gigs.