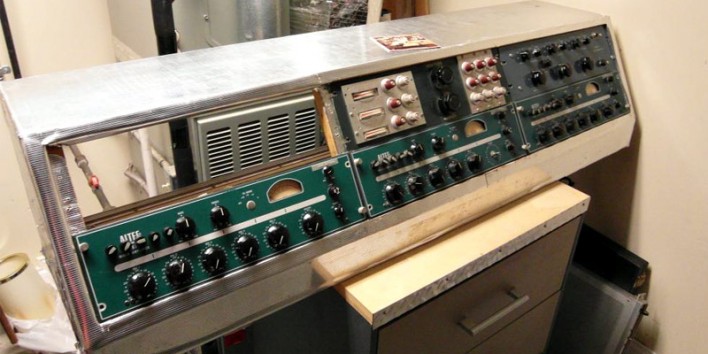 We recently returned from a trip to Texas to visit family. On the way down we made
an out of the way stop to spend a day and night in Clovis, New Mexico, the home of the famous Norman Petty Recording Studio. The studio is closed for business except for prearranged tours, and our tour guide Ken Broad showed us a wonderful time during the three hours we spent there. He knew all the history of the studio and answered our many questions about all the artists who recorded there and all the hit records that were produced by Norman in the 50s, 60s and 70s.
My brother Marv drove the seven hours from his ranch near Kerrville, Texas to join Carole and I. The reason I’ve had such an interest in this place is because Buddy Knox talked me into recording there, which we did three times in 1962-63 and 1964. Randy Charles, Dick Davies, Jerry Haacke and Cal Arthur were the band members at that time.

Most of Knox’s hits were produced there by Norman, including his number 1 song, Party Doll, when they used drumsticks hitting on a cardboard box to get the sound Petty wanted.
He was a genius in the studio and when you listen to all the Buddy Holly and The Crickets hits that were recorded there you can hear the unmistakable Clovis sound.
Every piece of equipment is still there as it was over 60 years ago. You are truly walking into past history. The piano I played on my record Baby Sittin’ is there as well as the microphone I sang into. All the records recorded there are framed and hanging on the walls along with the gold records from Holly, Knox, and Roy Orbison’s early hits.
The album, Bobby Vee Meets The Crickets, was done there along with Waylon Jennings songs and Sugar Shack by Jimmy Gilmer and the Fireballs. I could go on and on.

In the back of the studio there is a small apartment where the musicians could stay while they were recording. Often times a recording session may take 2 or 3 evenings and Norman didn’t have a time limit like other studios. You were done when you felt you had done your best. One song we did called I Need Someone, took 13 takes to get my voice like Norman wanted to hear it. The small beds where the Crickets slept are there as well as a pair of Buddy Holly’s famous eye glasses still setting on a night stand by the bed.
It was a real thrill for me when Marv spotted one of my records on the wall in the lobby and Carole saw another one on the wall in the control room.

The biggest thrill of all for the three of us was when Ken let us each sit in Norman’s chair, the same one that Norman sat in when producing all those hit records.
As I sat there I looked to my left and through the large glass window I could see into the studio and the spot where I stood 50 years ago, singing into the same microphone that Buddy Holly and many of my rock and roll heroes used.
Norman might have said to me, Myron you’re a little flat on the chorus–lets do it one more time.